Have you heard about dragon fruit but want to know more about it?

Dragon fruit, also known as pitaya, is generally found in Latin American countries like Mexico, Guatemala, Honduras, and Costa Rica. However, it is also cultivated in some areas of the United States such as Southern California, Florida, and Hawaii.

In this article, we cover 14 things you should know about dragon fruit.

What is Dragon Fruit?

Dragon fruit – also referred to as pitahaya or pitaya in Latin American countries – is a fruit that can derive from several cactus species that are native to the American continent. 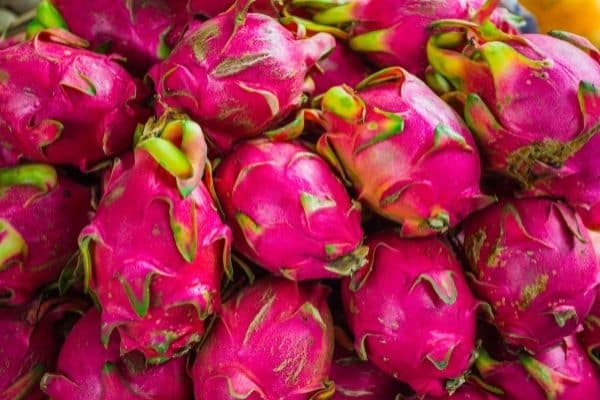 Dragon fruit can be grown from 30 to 700 meters above sea level. As for growing conditions, it needs reasonably warm climates, showing an optimum development in areas with average temperatures between 18 and 26 °C.

Why Is Dragon Fruit Considered A Superfood?

For some health sources like New Food Magazine and Healthline, dragon fruit is considered a superfood, mainly because it is a considerably healthy fruit.

Dragon fruit is low in calories but also high in fiber, antioxidants, phytonutrients, vitamins, minerals, and it contains healthy fatty acids and probiotics, making it a superfood.

In other words, it contains different elements that make it an overall healthy food to consume.

For individuals who haven’t tasted dragon fruit, dragon fruit ought to taste amazing based on how uniquely and beautifully it looks, however, there’s nothing special about its taste.

The taste of dragon fruit can be described as a crossover between a pear and a watermelon, but with the texture of a kiwi – so its taste doesn’t quite live up to its amazing look.

Ripe dragon fruit has a slightly sweet, syrupy taste, while an unripe one is bland and sour.

Is Dragon Fruit Good For You?

Yes, there’s reason to believe dragon fruit is good for you.

It has an array of elements that make it a nourishing food with many potential health benefits, including:

If you’re on the fence about consuming dragon fruit, there are many reasons why you should eat it.

Does Dragon Fruit Come From A Cactus?

Yes, dragon fruit often comes from a species of cactus called The Hylocereus, which is a vine-y cactus native to Central and South America but that is now also cultivated throughout Southeast Asia. 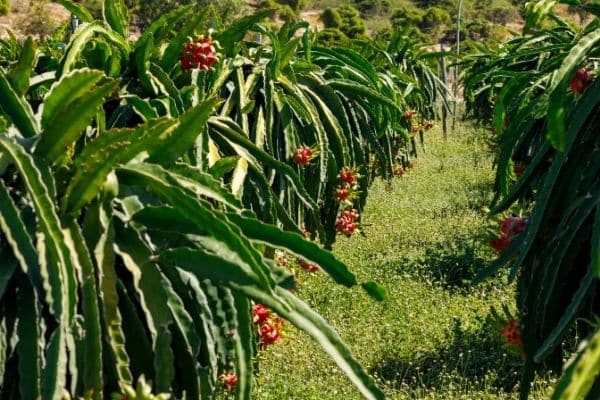 The Hyloreceus is also referred to as a night cactus because their flowers only bloom at night, and it is worth it staying up to contemplate them as incredibly beautiful.

If you’re following a strict keto diet, then the dragon fruit is one you should be consuming in moderation as one fruit contains about 13 grams of carbohydrates, which is considerable for someone on a keto diet.

Additionally, it’s also very low in fats, making it the exact opposite of any other keto food.

Does Dragon Fruit Have Caffeine?

No, the dragon fruit itself does not contain any caffeine, although there are drinks made with dragon fruit that do contain caffeine.

One such drink is Starbuck’s Mango Dragonfruit Refresher beverage which contains caffeine derived from green coffee extract, and not from the actual dragon fruit.

Yes, your poop and urine can turn red if you eat a lot of dragon fruit, which is thanks to red pigments in dragon fruit called betalains – which are normally broken down in the stomach and colon.

According to the researchers at the University of Edinburgh in the United Kingdom, this may occur when oxalic acid levels are high, which helps preserve the red color in feces. However, what exactly happens is not clear, but it’s mostly harmless.

Red poop can also be a sign of iron deficiency, so do keep that in mind when such a thing happens.

Why Is Dragon Fruit So Expensive?

The reason dragon fruit is expensive is quite simple and can be boiled down to basic economics – in other words, according to the Agricultural Marketing Resource Center, the demand for dragon fruit (in the United States) exceeds the supply available, therefore the price of dragon fruit is high.

Why Does Dragon Fruit Turn Pink?

Dragon fruit turns red or pink as it ripens, which is a result of a compound called betacyanin, a pigment that also naturally occurs in other fruits such as beets, conferring them with a bright, red color. 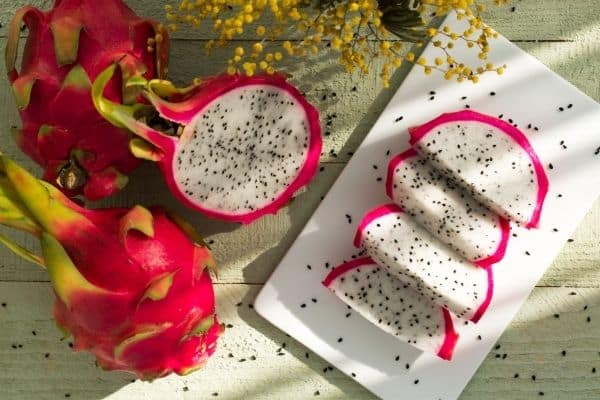 However, there are different varieties of dragon fruit available, and not all of them are bright red or pink, so do keep that in mind.

Does Dragon Fruit Need To Be Refrigerated?

You’re free to keep dragon fruit on the counter for one or two days, but if you want it to last longer, then it’s recommended that you store it in the fridge inside a plastic bag.

Generally, dragon fruit should last you one week in the fridge, but that also depends on how ripe it is, so it could last you less or more than that.

Can You Freeze Dragon Fruit?

Yes, you can freeze your dragon fruit for it to last longer or to prevent it from going bad, but keep in mind that freezing it will alter its texture and taste.

I would not freeze it, otherwise, there is no point in actually buying such a unique fruit.

Can Dogs Have Dragon Fruit?

Yes, dogs can eat dragon fruit as it is completely safe and non-toxic – and it contains an array of vitamins and minerals that are quite healthy.

If you’re intending to feed dragon fruit to your dog peel off the skin first and chop the flesh into smaller chunks so that he’s able to digest it better.

While seeds are usually not recommended for dogs for being toxic, dragon fruit seeds are pretty safe.

Bearded dragons can eat dragon fruit, but you have to feed them in moderation, as too much dragon fruit can be excessive despite the low calories and low sugar content.

Be sure to remove the skin and chop the flesh into smaller portions so that your bearded dragon can better digest the dragon fruit.

Dragon fruit is a unique tropical fruit that’s worth trying.

It is a cross between a pear and watermelon, adds a pop of color to your plate, and is considered a superfood because it contains essential nutrients, prebiotic fibers, and beneficial plant compounds — all in a low-calorie and high fiber serving.

If you’re looking for a way to add variety to your diet, dragon fruit is certainly a unique and healthy option you can find available in many supermarkets across the United States.